Do you have a passion for the magical arts? Do you live in Gloucestershire or the surrounding area? You may be interested in joining the Cotswold Magical Society Apply for Membership 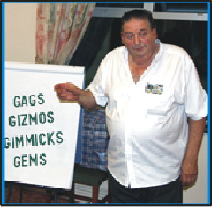 Dave Bennett is an Honorary Life Member of the Society and is the club's archivist.
In each issue of the Devil's Chimney, Dave brings forth items of interest from the club's, and his own past. The photo shows Dave giving a lecture to the membership a few years ago.

The World's Fair (The Showman’s newspaper) of 6th March 1943 reported the formation of a new magical Society in Cheltenham and its intention to affiliate to the Magic Circle, London. The following week it was reported that the majority of the members of the Cotswold Magical Society were members of the Magic Circle, "while ALL the officers were members of that body". What an auspicious start for the Cotswold Magical Society created by George Sylvestre and Wilfred Tyler. These two planned the formation of the society at "Cotswold", a local hostelry with the support of their host Donald King-Higgs. Officers at that time were:


The number of magicians who promised to support the society is recorded as 22. Lady members were to be admitted provided they were practising magicians.

In those initial reports there are other names to conjure with - Horace King, Ricardo, Professor Bofeys, Reg Gattward and Eric (Nit-Wit) Williams. At the first Closed Meeting the subject was "Penetration effects - have they entertainment value?". There is no record of any answer to this question but the effects presented would suggest an affirmative. They included a "Die Penetration through hat" by Peter Akester (a blind member) and "Block and frame effect with original routines" by Colin Hughes.

On Sunday, July 4th, 1943 at the Town Hall, Cheltenham the society held its first magical séance entitled "Magic of the Cotswolds". Admission was by invitation and over 300 people attended. Apart from local notables there were representatives of the Magic Circle, the British Ring (IBM), the British Magical Society, the Society of American Magicians and other societies.

The first competition was held on February 6th, 1944 with various classes of effect e.g. the most original effect using (1) cellophane, (2) crepe paper, (3) ribbons, etc. The Silvestre Wand was won by Reg Gattward whom the local paper records also carried off a special prize for the most entertaining item. The prize "was given up by Mr Goodliffe, one of the judges."

From its beginning the society had acknowledged the magical link with John Nevil Maskelyne whose birthplace had been in Cheltenham.

At the formation of the society it had been stated that a recognition plaque would be erected but a suitable location had not been determined. The birthplace was then suspected to have been on the site of the existing GWR station. In a Programme for the second annual "Cheltenham Section Day" on 15th February 1947, Tom Hayter writes "J.N. Maskelyne, the Grand Old Man of our craft, was born here in 1839………. Some little time ago I was fortunate in being able to discover that Maskelyne was born at number 20 White Hart Row, now known as White Hart Street, Cheltenham."

In May 1948 a plaque was unveiled at the Old Town Hall by Maskelyne's grandson, Noel. Recently this plaque has been recovered, refurbished and installed in the foyer of the Cheltenham Everyman Theatre.

One notable feature in the history of the society was the Annual Cotswold Assemblies. These were the conventions of their day and in 1948 included what was called the First Magical Traders Exhibition. Among the competitions was one open to all magical societies in Great Britain, this subject each year to be arranged by the Council of the Society.

Those halcyon days are now long gone and the Assemblies are a thing of the past. The Society has for a good many years been based in Gloucester and its paid-up membership currently hovers just over the 30 mark. In 2003, the Society has begun to republish its magazine entitled "The Devil's Chimney". The Devil's Chimney is a local feature at Leckhampton Hill

“Magic of the Cotswolds”
In the Drawing Room of the Town Hall, Cheltenham.
Sunday July 4th 1943